I make a cameo appearance in the Southern Illinoisan's cover story today.

Three reporters and a photographer from the paper did a story on spending time in a local house in Marion thought by its owners to be haunted. In order to test their theories the paper brought down two ghost hunters from St. Louis to do check the place out.

The pair pulled into the Sackmans' driveway in their trademark black Chrysler PT Cruiser, the "Haunt Rod," at precisely 8 p.m. They joined what was becoming a fairly crowded party, consisting of our reporting team, the Sackmans, their daughters Marla and Stephanie, and local historian Jon Musgrave, who had clued us into the home's haunted history and was along to do research for a possible new book.

I'd met Mrs. Sackman last December after hearing a story from a relative about the house. It does have an interesting history, according to the tax records it was built just a decade after the Civil War in 1875.

At least one former owner, Sam Casey, the editor of the old Marion Evening Post had a heart attack and died in the foyer. More ominously is what happened to his daughter's family. She, her husband and both of their adult children ended up at the state mental asylum in Anna where they all died.
Posted by Jon Musgrave at 1:17 PM No comments: Links to this post

It's big shaggy beast weekend at the Associated Press.(See the previous post for the prehistoric kind turning up.) Now Jim Suhr has a story on 250 bison ranging on 800 acres of hills and valleys near Cobden, in Union Co., Illinois.

Historically, I can't find a reference to the last bison in Union County, though the county history written in 1883, mentions a buffalo road that crossed the county about a mile south of Jonesboro.

To the northeast however, according to the Milo Erwin's History of Williamson County, Illinois bison were last seen here in 1810.

The new bison herd belongs to Clifton and Kim Howell who are hoping to catch onto the growing demand for lean bison meat.

According to the Department of Agriculture, 16,225 bison were processed in federally inspected plants during the first half of this year, up from 14,377 slaughtered during the same period last year. Since 2001 - the first year the USDA tracked bison production - processing of the meat has nearly doubled.

Advocates point to bison's healthfulness: A serving of buffalo meat has about 2.42 grams of fat, compared with 8.09 grams for select beef or 7.41 grams for skinless chicken, the bison association says.

Posted by Jon Musgrave at 12:48 PM 2 comments: Links to this post

The Associated Press today offers a combo story on the multiple mastadon and mammoths remains that turned up across the state in September. I'd read about a few of the findings about a month ago in the Chicago Tribune.

For the first time though, I've actually read what the difference is between mammoths and mastadons, both of which to me resemble a huge shaggy elephant. Here's what paleontologist Jeffrey Saunders explains.

"Mastodons browsed off trees and lived in wetlands, so they were occupying their own burial grounds, and we often find fairly complete specimens," he said. "But mammoths were grazing animals that haunted the grasslands where the glaciers had just retreated. They lived and died in open fields, and their remains were scattered. Streams often carried their teeth and bones into wetlands and gravel pits."

Saunders said that while both mastodons and mammoths were quite prevalent in Illinois until some 10,000 or 11,000 years ago, there's no way of knowing what their total populations were. And although both animals resembled modern elephants, they were not closely related to each other.

Posted by Jon Musgrave at 12:41 PM No comments: Links to this post

Who's a Wall Flower Now?

Bob Ellis interviews state Rep. John Bradley, D-Marion, following the passage by the Illinois House of his bill to ban riverboat gambling in Illinois. This is the same man Rod Blagojevich called a "wall flower" for being such a back bencher.

It doesn't have a chance to pass the Illinois Senate, but it's creating a bit of angst in the Capitol as there are forces who want to see gambling expand in the state, or at least allow Chicago access to the 10th riverboat casino license that's setting in judicial limbo.

Here in Southern Illinois, Republicans Mike Bost of Murphysboro and David Reis voted in favor of the bill. Bradley's fellow Dems, Brandon Phelps of Norris City who represents Metropolis and its Players Riverboat Casino, and Dan Reitz of Steeleville, who also represents counties along rivers that could potentially get a riverboat someday, voted no. Only Kurt Granberg of Carlyle proved the closest Democrat to support the bill.

Surprisingly, and probably what is causing the angst in Springfield and Chicago is that Mike Madigan, the Democratic Speaker of the House, voted in favor as well.

Check out the full vote here.

I guess Bradley can mulch up the wall flower designation given to him by Gov. Rod Blagojevich.
Posted by Jon Musgrave at 10:58 PM No comments: Links to this post

Panthers in the Shawnee? 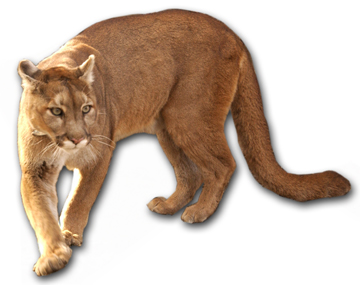 Brian DeNeal of the Daily Register in Harrisburg has a good story today about an Alaskan backpacker who just finished the River-to-River Trail across the region.

What struck me was the following:

Approaching Giant City State Park, the two took some time to look at names in Antioch Cemetery. They walked a few miles more before they camped for what became a spooky night.

"We heard the most sounds and calls we can't explain. We thought, 'That definitely sounds like a child crying,'" Hage said.

"In Alaska at night you are going to hear an owl or a wolf, but never multiple owls."

The "sounds like a child crying" reminded me of another story.

Full of life, the girl went skipping and hopping along the path through the forest. It was near the close of a serene day in autumn time, and all nature seemed calm and peaceful. There was nothing in the surroundings to suggest danger, even if the sun was getting low.

But hark! What was that? It sounded just like a baby crying! For a wailing sound had reached the girl's ear. She paused. Again came the sound, seemingly from a clump of brush near the path. She went to investigate, but on reaching the spot, the sound was deeper in the forest. Thus was the panther luring the girl to her death by its human-like cry. Again, she followed the sound, unaware of the awful doom awaiting her.

She peered here and there through the underbrush, but no one was there. Then suddenly there was a savage growl in the branches of a nearby tree. Looking upward, the girl was terror-stricken to see a large cat-like creature crouched on a low limb, ready to spring. Its teeth bared, its fierce eyes ablaze, its ears laid back, and the end of its tail weaving to and fro.

Will W. Husband wrote about this panther attack in his 1943 book Old Brownsville Days now available in Murphysboro from the Jackson County Historical Society. Husband's grandfather had served in the search and rescue party that went looking for the young girl.

Of course, the possibility of the crying sounds coming from a panther or cougar should be surprising since the backpackers had just traveled through the Panther's Den and Crab Orchard National Wilderness Areas.

When I mentioned DeNeal's story to my uncle tonight he recalled two other panther sightings in the eastern part of Williamson County in what used to be called Rock Creek Precinct (now the eastern two-thirds of Crab Orchard Township).

The first sighting was one he remembered his grandmother Abbie (Harris) Angel recalling. She told him her family heard an awful screaming one day. When the family went outside to see what it was, they saw a panther on top of the chicken coop. Either during that incident or another time, at the sound of a panther scream, the horses ran out of the lot and into the barn.

My great-grandmother was born in 1893 so that would put the story around the turn of the 20th Century.

The second sighting my uncle dated to 25 or 30 years ago (1975-1980). He was taking up corn in a field south of what's now Old Route 13 about a mile or two south of Jourdan's Curve when he saw a panther run across the cornstalks in front of his combine. He later saw the cat's prints around a deer carcass he had noticed that had been drug for about 150 feet from where he first saw the dead deer.
Posted by Jon Musgrave at 9:45 PM 1 comment: Links to this post

Pete Rosenberry has a new story on what's keeping SIU archeaologists busy at Kinkaid Mounds down near the Ohio River on the Massac-Pope county line.

Posted by Jon Musgrave at 4:24 PM No comments: Links to this post 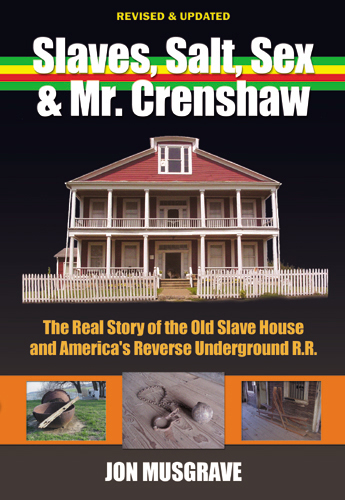 Finally, after months of delay, the hardcover edition of Slaves, Salt, Sex & Mr. Crenshaw: The Real Story of the Old Slave House and America's Reverse Underground R.R. has arrived back from the printers.

The delay wasn't the printer's fault, but rather mine, as it's been a tough year to focus on my writing due to a number of setbacks and false starts.

Still, if you are interested in what really happened at the Old Slave House and the nearby saltworks, the intersection of dirty politics and the organized crime of the "ancient colony of horse-thieves, counterfeiters and robbers", you will definitely enjoy the book.

The hardcover is an expanded and revised edition with 96 more pages making it a total of 608 pages. Part of the added page count is due to a slightly larger font and margins designed to make the book easier to read for more folks, but I've also added new information and tweaked just about every chapter in the book as well as add new back matter. There's also numerous additional photographs which now total more than 65 inside the book.

You can either order online or by mail.
Posted by Jon Musgrave at 4:27 PM 1 comment: Links to this post