Today's Quad-Cities Times outlines work ready to progress at restoring the home of Jennie Hodgers who served in the Civil War and lived most of her adult life under the name of Pvt. Albert D.J. Cashier.

The one-room house is small and unprepossessing. With its shuttered windows and the multiple padlocks that used to be inside its door, it's secretive, too _ much like the person who lived in it for some 40 years.

Now, to honor one of Illinois' most unusual Civil War veterans, plans are being made to move the 130-year-old Albert Cashier/Jennie Hodgers house back to its original site in the Livingston County village of Saunemin from a storage site in nearby Pontiac.

The house's secret was that Cashier and Hodgers were the same person.

Saunemin Mayor Mike Stoecklin told the reporter the house will be back in his city by the end of the year, but restoration will likely take longer.

He said a lecture by former Pontiac tourism director Betty Estes convinced him the house should be restored to its original site. Estes personally stepped in to save the house 10 years ago when Saunemin volunteer firefighters wanted to burn the house as a training exercise; she had it dismantled and trucked to Pontiac for safekeeping.

Way to go Betty, and thank you Mayor Mike for your work to preserve history and help figure out a way today's society can find value in it.
Posted by Jon Musgrave at 7:35 PM 1 comment:

Marathan Pundit, a/k/a John Ruberry, uses historian John J. Miller's comments in the latest National Review to highlight what both men see as problems in the planning for the bicentennial of Abraham Lincoln's birth in 2009.

As they pointed out, the first events are scheduled for little more than a year away in February 2008. They point to the makeup of the commission leadership as the key issue.
Posted by Jon Musgrave at 7:30 PM No comments: I've got a mini-review up for it at the Illinois Writers blog.

Although the publisher sent me two review copies I actually purchased the book last week in part because it might offer a hint of what archaeologists might find next year at the Old Slave House.

The book's title refers to Sangamo Town, which like New Salem, developed and died out within a generation in west-central Illinois in the area of the Sangamon River.
Posted by Jon Musgrave at 10:38 PM No comments: 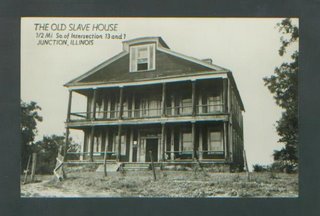 We had hoped that the old folding doors that once separated the front bedrooms and the hallway were still there just enclosed in the walls. Regrettably the team didn't find any doors last week.

However, they did find where the doors connected which might help them be able to reconstruct what they looked like. They didn't find any track in the floor for the doors and will check the top of the open on one of their future trips.
Posted by Jon Musgrave at 10:48 PM 4 comments:

Crenshaw Rascal Ron Does It Again

Tuesday night before I talked with George Sisk about what had happened 10 years earlier on that date, I talked with my fellow Crenshaw Rascal Ron Nelson.

Ron was the one who started the research into the Old Slave House in September 1996 and found the first solid proof that the stories were real on November 4, 1996, up at the Illinois State Archives.

While we talked Tuesday about all that has happened in the last decade he told me about his new research project.

While I won't reveal what it is, it's definitely breaking new ground in what we know about a major social and political character from Illinois history who lived here in the 1820s and early 1830s.

As a preacher and a former resident of Hardin Co., Illinois, where he helped organize the county historical society, Ron's interests usually fall into one of two categories. It's either religious history, usually that of the early Baptists, or outlaws and counterfeiters, of which Hardin County had plenty in its early days.

I won't give any more details about his current project other than to say this new project surprisingly may fall into both categories.
Posted by Jon Musgrave at 3:57 PM 1 comment:

I just ran across Will Howarth's blog for the Iles House, the oldest residence in Springfield, Illinois.

It's been moved and renovated to house the new Museum of Springfield History — you know, all of the other history of our state capital that doesn't deal directly with Abraham Lincoln.

It's location at 7th and Cook places it on the edge of downtown and within walking distance of the various Lincoln sites.

Howarth's blog has some great pictures of the work being done as well as some older photographs from when the moved the house to its current location.
Posted by Jon Musgrave at 3:46 PM 1 comment: