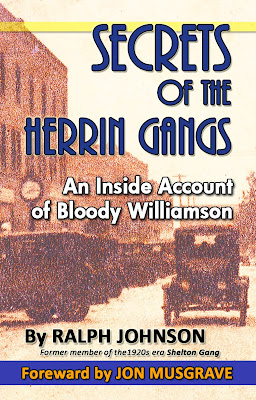 While I'm still working on my pictorial history of Southern Illinois in the 1920s, I've come across of gem of original history that I wanted to bring out.

Ralph Johnson ran with the Shelton Gang during Prohibition. As the Shelton-Birger Gang War wound to close in December 1926 and the first week or so of 1927, he decided to get out and cash out.

The way they did it back then wasn't much different than today. He went out and sold his story to the press, first to the St. Louis Star and then to the NEA news service which distributed his story as a 10-part series for newspapers across the country.

They called it "Secrets of the Herrin Gangs". In it Johnson told the inside account of life in the Shelton Gang as well as well as his own experiences with Charlie Birger and his gang.

It's been a key source of original gang life for decades. Now, for the first time it's available in one volume. I've added a new foreword with information about the life and times of Johnson, as well as who I think he really was. I've also added footnotes with corrections, dates and additional information, as well as an index.

The booklet retails for $9.95, plus shipping and handling, and sales tax if you live in Illinois. To order online just click the "Buy Not" button below.

For more information on books from IllinoisHistory.com, including books on the Old Slave House, the Bloody Vendetta, Abraham Lincoln or Gallatin County, Illinois, check out the book page at www.IllinoisHistory.com/books.

UPDATE - I'm out of stock with this version of the book, though Taylor's Mini Mall in Fairfield and the Book Emporium in Harrisburg may still have copies. There's a new version at the printers that has much more on the man behind the alias of Ralph Johnson. It will be out in mid-October.
Posted by Jon Musgrave at 10:41 AM 6 comments: