Secrets of the Herrin Gangs Goes to the Printers 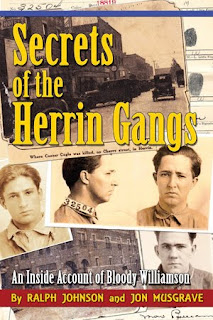 It's on its way. Secrets of the Herrin Gangs has been sent to the printers and I can now take a breath for a moment or two before jumping into the next project.

Like the earlier post from August, the Secrets book is an inside account of Bloody Williamson as told by a member of the Shelton Gang who had worked for both the Shelton Brothers as well as Charlie Birger. Unlike the earlier post the new book is a 96-page paperback that expands on Ralph Johnson's inside story with what I've discovered about the man behind the Ralph Johnson alias.

I won't tell you the name in this post, but if you click on the cover and look at the signature in the bottom right corner, you'll find it. He was a Benton native who played a much larger role in Bloody Williamson than anyone realized. It's also his fingerprints on the book as well.

For the last couple of years I've been digging into the region's Prohibition Era history which has grabbed my interest like the Old Slave House did a decade ago. I think I'm working on four or five (or maybe six) different Bloody Williamson projects from a screenplay with a St. Louis-based filmmaker to publishing other writers' works, as well as working on my own writing projects.

I'm still looking for photographs and stories for an upcoming pictorial history of Southern Illinois in the 1920s that will be titled, "The Bloody Years." I've found some real neat ones that's not been published before as well as intriguing angles on the big stories that are just now being uncovered.

The new "Secrets of the Herrin Gangs" will be out in mid October. Within the next 24 hours or so (I've got a couple of other deadlines to meet before then), I'll have links up for some special offers for those wanting to pre-order the book before it gets shipped back to me.
Posted by Jon Musgrave at 12:03 PM 2 comments: