Secrets of the Herrin Gangs 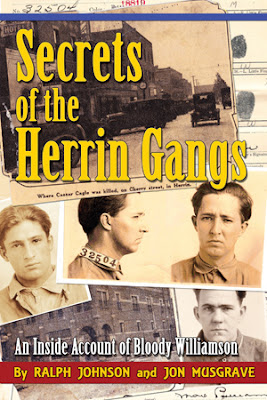 The Secrets of the Herrin Gangs, my latest book, has arrived from the printers! This 96-page paperback gives a unique inside view of the Shelton Brothers and Charlie Birger from the 1920s, as well as in in-depth account of the gangster known as the brains of the Herrin outfit who worked for both gangs.

Ralph Johnson, co-author, was the alias of a Shelton gangster who decided to cash out when he got out of the gang temporarily at the end of the Gang War in January 1927. He sold his inside account to the St. Louis Star, and then to the N.E.A. news service which distributed his story in a 10-part series that newspapers printed from coast to coast that month. For the first time all ten accounts are collected on one volume.

I first ran across Johnson's stories in the clippings from the St. Louis Star in the Paul Angle Papers at the Chicago Historical Society. Angle, was the Illinois historian who wrote the classic, Bloody Williamson, more than a half century ago.

When I started this round of Bloody Williamson era research a couple of years ago I had two questions dealing with Johnson's account. One, "Was he for real?", and if he was, then, "Who was he?" since he freely admitted Johnson was his alias.

The second half of the book deals with those questions and reveals the real man behind the pseudonym. He had quite an interesting criminal career.

I won't reveal his name here in this post, but I'll give you a hint, if you look on the cover closely you'll see his name. He's also the double mugshot on the cover as well.

Click on the "Buy Now" button if you want purchase the book online and get a signed copy. You can also mail your orders to IllinoisHistory.com, PO Box 1142, Marion, Illinois.

Check out my IllinoisHistory.com Books page for my other books on the Old Slave House, the Bloody Vendetta, Lincoln stories from the Civil War, and the history of Gallatin County, Illinois.