On Sept. 26, 1961, Gov. Otto Kerner dedicated the first 30-mile stretch of the Chicago to Cairo superhighway. At the time motorists could drive only from Marion down to Dongola.

The Southern Illinoisan quoted Kerner at the time claiming the route through the Shawnee Hills as “one of the most scenic to be found in the entire 41,000 mile national interstate system.”

Illinois had 1,589 miles of planned interstates, but only about one-third ready and open to the public.

Kerner bragged that when completed, the interstate system “would make it possible for motorists to leave the point where we are assembled today and drive from coast to coast and from border to border without encountering a single traffic light.”
Work on the interstate began in the 1950s. At the time engineers priced the 50-mile stretch “though the hill county of southern Illinois” at $21 million, according to an Oct. 17, 1959, article in the Mt. Vernon Register-News.

Interstate 64 was part of the original plans for the state’s interstate system, but not Interstate 24. Originally, planners called for I-64 to cross the region from Vincennes, Ind., to St. Louis, intersecting I-57 at Salem. Only due to strong pressure in Indiana to move the interstate closer to Evansville helped pulled the route down to Mount Vernon.

Although not part of the original system, U.S. Rep. Ken Gray hinted at the future I-24 as early as Mar. 8, 1960, according to the Register-News.

By using a southerly alignment of Route 64 it may be possible to utilize Interstate 57 from a point south of Mount Vernon, Ill., to Pulley’s Mill south of Marion, Ill., and a newly constructed road from Pulley’s Mill across the Ohio River to Nashville, Tenn., and points south,” Gray said, accurately predicting the eventual route.

When I-57 opened in 1961, only the 20-year-old Motel Marion stood close to the interstate, luckily for them as a new Route 13 had opened along DeYoung St., on the north side of Marion a couple of years earlier. The four-lane portion of Route 13 only ran from Fair Street on the east side of Marion west to Illinois Route 148. From there it was just two lanes to Carbondale.

Marion Castellano broke ground on the first modern multi-story hotel on DeYoung St. in the summer of 1960. It opened eventually as the Travelodge in Nov. 1962. It later became the Family Inn and then the Heritage Inn before closing in the 1980s.
Rep. Gray’s brother Ralph Gray opened up the Marion Gray Plaza motel in the summer of 1963.

Ralph Gray and three Harrisburg businessmen developed the 101-room Ramada Inn on the east side of the interstate in Marion which opened in July 1967. The coffee shop had half barrels in the ceiling and became the city's first Cracker Barrel when it opened. Today the inn is operated as a Days Inn.

Carbondale Holiday Inn owner Stan Hoy announced plans for a new Marion hotel in 1968. The new Holiday Inn with then just 100 rooms opened in June 1969. It later became a Travelodge and finally an Executive Inn before closing in the last decade. A new Holiday Inn Express is currently under construction in the city up on The Hill.

Gov. Kerner came back to the region on Nov. 1, 1962, to open the next stretch of I-57 from Marion to Johnston City. The West Frankfort interchange opened the following year and by 1965, the interstate opened for traffic as far north as Mount Vernon.

One interesting tidbit about the original construction. when the state bought the land for Exit 30, the I-57 interchange with Illinois Route 146 east of Anna, a small park had to be relocated. Known as King Neptune Park, it was the final resting place of a 700-pound hog whose patriotic duty during World War II helped generate $19 million in sales of war bonds.

Eventually, his remains and a marker was placed along Route 146 a few miles east of the interchange. In recent years though a new marker has been placed at the Trail of Tears Welcome Center along the interstate just north of the interchange.

Dedications and ribbon cuttings continue 50 years after the interstate opened. State and local officials will open Marion’s newest ramp onto the interstate off of Morgan Avenue this Thursday.
Posted by Jon Musgrave at 11:19 PM 1 comment: 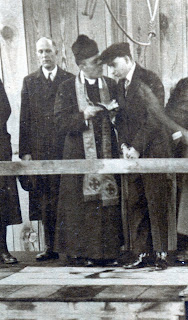 West Frankfort, Johnston City, Willisville and Whiteash were just some of the communities that saw bloodshed. I'm still looking for descendants of some of residents, victims and participants of that time period for additional stories and photographs. Anyone with more info please contact me.
Posted by Jon Musgrave at 4:01 PM 2 comments:

Best Movie of the Year - The Help

Went and saw "The Help" tonight at the theater. After a summer of popcorn movies of super heroes, teen wizards and battling robots, it was great to watch a film that showed some heroic actions at a scale we all can relate. Excellent movie. The best I've seen this year.

Teachers I highly recommend this one for your classes. It's more than a history lesson. It's a life lesson in character and self worth.

The trailer doesn't do it justice, and this is one I suggest don't look at the trailer, just go and be pleasantly surprised.

Posted by Jon Musgrave at 12:47 AM No comments: