Southern Illinois historian Jon Musgrave of IllinoisHistory.com and Shelton Gang granddaughter and novelist Ruthie Shelton will be signing books next Tuesday, Sept. 1, in Benton at The Buzz during lunch time and at King City Books in Mount Vernon later that afternoon.

Bruce Cline, founder of the Little Egypt Ghost Society and author of History, Mystery and Hauntings of Southern Illinois published by IllinoisHistory.com, will also attend the signing at The Buzz.

Ruthie and I came out with Inside the Shelton Gang: One Daughter's Discovery two years ago after a number of years of research individually, and then working together. She is the daughter of "Little Carl" Shelton, one of the nephews involved the Shelton Brothers gang that ruled downstate Illinois crime from the end of the Prohibition Era to the 1940s.

Since then she has written two small novels that have been inspired by her father's generation in the mid 20th Century.

Dubbed The Untold Story series, Volume 1, Death, Deceit and Discovery introduces the Callahan family, once considered to be the most influential, violent, and prosperous crime organization in the Midwest. Vol. 2, Shadows, Siblings & Suicide picks up the story a decade later when the wrongs of their pasts leads to insanity, murder and suicide in the present.

I will have all of my published books there except the one on the Old Slave House. That one is out of print at the present. What I will have include the following:

I also will have three books that I've edited.

In addition to all of the above books I will also have James T. Carrier's five books that he's written on aspects of mostly-Franklin County history, though a couple of titles are also of a more general interest.

Mr. Carrier is a retired 95-year-old educator and writer who lives in the county but no longer gets out much. IllinoisHistory.com has been distributing his books since last year. His books are as follows.

If you can't make either event you can always order the books here on the website by just clicking the book link on the side, or going to IllinoisHistory.com/books. If you order direct all of my books will always be signed.

Posted by Jon Musgrave at 8:19 PM No comments:

For the first time since Cata's Books moved out of the outlet mall at West Frankfort (which the city is now trying to purchase) I have another place selling my books in West Frankfort.

I want to welcome the new Main Street Baking Co. & Mercantile at 328 E. Main St. in West Frankfort, to the network of fine establishments in the region carrying books published and distributed by IllinoisHistory.com.

Besides rolling in the dough with loaves of fresh bread and sandwiches they offer everything your sweet tooth desires, except donuts. For that they will point you down the street.

That's Owner Darla Dawson on the right and her manager, Esther Willis, on the left. The Benton Evening News had a nice profile piece on Darla earlier this summer.

Everyone can also purchased books directly from this site though I have to admit sweats aren't included.
Posted by Jon Musgrave at 8:28 PM No comments: 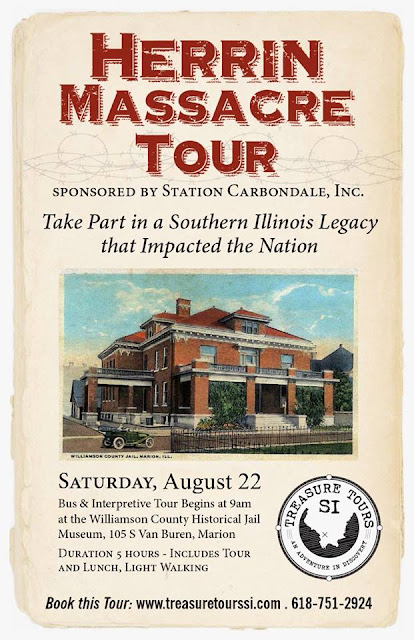 If you ever wanted to learn more about the Herrin Massacre now is the time. Our last tour of the summer will be Saturday starting at 9 a.m. with the bus leaving from the Williamson County Jail Museum at 105 S. Van Buren St. in Marion.

S.I. Treasure Tours conducts the tours and yours truly, Jon Musgrave of IllinoisHistory.com, serves as the guide. The tour includes visits to the jail museum, Station Carbondale railroad museum and the Herrin City Cemetery, as well as lunch at an area historic site.

Go to www.TreasureToursSI.com to reserve your seats now.
Posted by Jon Musgrave at 4:36 PM No comments: