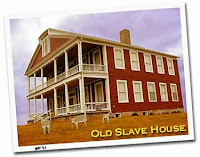 While on WJPF-AM this morning talking about the new Twin Wars of the 20s tour from SI Treasure Tours, host Tom Miller asked about any updates on the Old Slave House.

There's nothing new locally that I can talk about, but at least in Springfield there's legislation that will shift the state's historic sites from the Illinois Historic Preservation Agency into a new division within the Department of Commerce and Economic Opportunity that will include tourism, historic sites and the state's film office.

The bill would also spin off the Abraham Lincoln Presidential Library and Museum into its own separate agency and allow DCEO to create a new public-private non-profit partnership to promote the state's economic development efforts.

The legislation (House Bill 574) has the support of Gov. Bruce Rauner as well as House Speaker Michael J. Madigan and House Republican Leader Jim Durkin. It's expected to pass though it's currently in the House Rules Committee.

Some agency folks in Springfield disagree with the move and I respect their positions, but the legislation offers a lot of possibilities for future improvement.

One thing I told Tom this morning about the new move is that the state tourism director, who I also think will be the head of this combined division, already knows about the house. More importantly, he knows how historic sites and tourism can intersect for economic development (and as a Springfield alderman, he's seen this firsthand.)

About a month ago I was in the Capitol in Springfield and had a chance to speak with Cory Jobe, the state's new tourism chief. He formerly served as chief of staff for Judy Baar Topinka in the state comptroller's office.

He remembered meeting me a number of years ago when I gave him a tour of the Old Slave House back when Ron Nelson, Gary DeNeal and I were still researching the site. I knew his name was familiar and that we had crossed paths somewhere else as well.

Back home I checked my notes and discovered that in December 2009 while working for the Southern Illinois Tourism Development Office, I was called to a meeting in Springfield with my regional counterparts, two people from the state tourism office as well as Cory and Maynard Crossman of Peoples Economic Development Corporation and Peoples National Bank to discuss a new historic preservation tax credit legislation that Gov. Rod Blagojevich's administration was planning to back in the next session of the General Assembly.

Cory had come from Topinka's state treasurer office where he had worked on a tourism related program, and Crossman was the former director of IHPA for the last year or two of George Ryan's term.

I remember the meeting vividly because on the way to Springfield I turned on the radio and learned that FBI agents had been seen taking the governor out of his Chicago home in handcuffs. Talk about the elephant in the room an hour later during our meeting, or in this case, a donkey.

Needless to say the Blagojevich administration didn't push the tax credits bill very much that year so it didn't go anywhere. Over the years various versions of the legislation get re-introduced, each year a bit more watered down than the last. I sat in on a presentation last year at the Herrin Chamber of Commerce offices about the then latest version.

The current version of the legislation is House Bill 240.

One more item on the Old Slave House, for those who need a visible reminder of the site, check out Ghosts of Old Shawneetown's page of pictures from the house back in the 1990s.