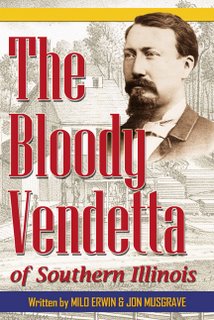 This morning between the hours of midnight and 4:30 a.m. I finally was able to make some progress on wrapping up my latest book, The Bloody Vendetta of Southern Illinois.

I'm still a couple of chapters away from completion.

This was supposed to have gone to the printers earlier this month, but a drunk drver changed my plans.

Between the pain medication that's prevented me from concentrating to the one-handed typing, it's been diffiucult to get back in the mode of writing.

I'm still shooting for the book to be available by early to mid-December in time for Christmas.

From the back cover:

In the 1870s the Bloody Vendetta wreaked havoc in the heart of Southern Illinois leaving a half dozen men assassinated and property values in freefall. As a defense attorney Milo Erwin represented many of the suspects involved. Following the trials of 1875 and 1876, Erwin published the first detailed account of
the Vendetta. Now Jon Musgrave pieces together the rest of the story, combining Erwin's work with contemporary newspaper accounts as well as modern research. From the rise and fall of the Ku Klux Klan as they took advantage of the chaos, to the
events of what happened after Erwin wrote his book, Musgrave connects the dots from the Vendetta to the Civil War era Aiken Gang to the second generation of outlaws including the ill-famed Jennings Gang of the Wild West and later Hollywood, to the
robberies and murder in the Carterville and Carbondale area of the mid 1890s.

The Inside Dope said...

Congratulations on what sounds like a fascinating book. I'll be sure to look for a copy.